Protect Yourself from Animals When Outdoors

Keep animals away from your campsite and, if needed, signal for rescue using Nite Guard Solar.

Nite Guard Solar not only keeps animals out of your backyard, it can keep you safe when you venture into their backyard. Whether headed into the wilderness for a family camping adventure, a backpacking expedition, or a hunting or fishing trip, Nite Guard Solar lights will keep critters away and help you stay safe from predators.

When camping, the smell of food—enhanced by outdoor preparation and cooking—attracts animals to your campsite. This attraction for food is one of the strongest instincts they have, only topped by the survival instinct to stay safe. Nite Guard Solar taps into an animal’s deep-rooted fight or flight instinct, which is triggered by the flash of the red light. This flash turns on automatically at dusk, and when animals see the red flash, they stop and will not approach, keeping them a safe distance away from your campsite.

Not only does Nite Guard deter animals from your campsite, it can also be used as a personal security device. For campers, hunters, or hikers who become lost, Nite Guard Solar can help them attract attention from rescue crews, as the flash of the light can be seen up to a mile or more vertically. The device’s compact, lightweight design and weatherproofing against rain/snow and extreme temperatures makes it the perfect personal safety device when venturing into remote areas.

Protect Your Property from Human Intruders

Mimic the appearance of a security system to discourage theft and vandals.

Though Nite Guard Solar lights are best known for their effectiveness at deterring animal predators, our lights serve a dual purpose and can also be installed as security lights. When used to protect property from nocturnal animal predators, Nite Guard Solar’s flashing red lights are perceived by the animal as a threat, and quickly frightens them away. When viewed by humans in the context of a building or vehicle, the brightly flashing red light emitted by Nite Guard Solar lights mimic the appearance of a security system. 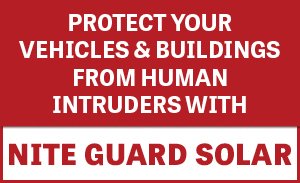