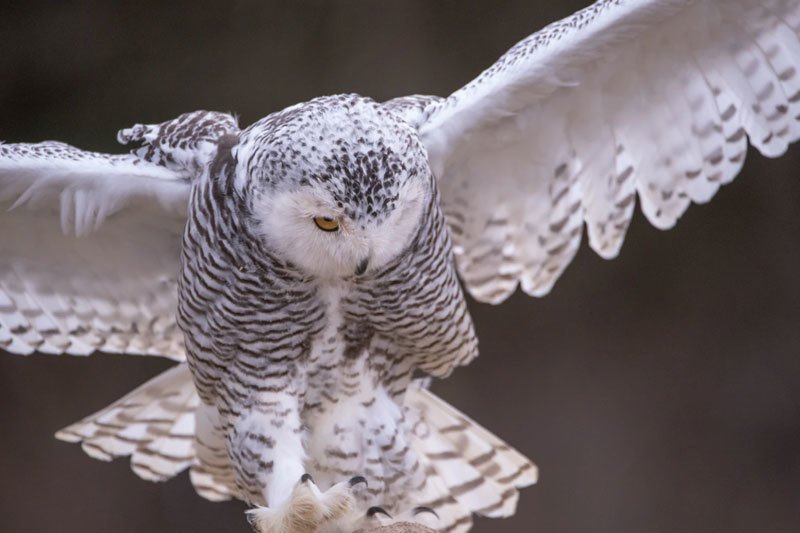 Owl Attack Defenses: The Hungry Owl in Winter Is a Fearsome Predator

The silent attack of owls in the night is legendary. From their specialized feather structure to their night vision, sharp talons, and powerful lift with prey in their claws, they dominate the night as they hunt. As an apex predator with no natural enemies that routinely seek them out, they can seem an invincible enemy of your birds and mammals.

The Owl’s Attack Is Also a Moment of Vulnerability

Being powerful night hunters doesn’t mean that owls take unnecessary chances. This moment of vulnerability is our opportunity to create a defense strategy for creatures under our protection. Owl attacks, especially when they’re attempting to make off with larger mammals or dine on them on the spot, can leave them exposed to attack, and they realize that. By exploiting that vulnerability, we have an opportunity to discourage owl attacks on our land during the winter season when they’re especially hungry and year-round as well.

Keeping Owls Away From Our Mammals and Birds — And Sometimes Ourselves

Since birds of prey are generally protected by law and night predators have the cover of darkness to protect them as well, it’s up to us to find ways that we can send them the message that there are other, better places to attack and feed. In some cases that can even protect people, since owls have been known to swoop down, even in cities, and mistake a person’s hair for prey. Not so amusing if you’re the one getting your scalp stitched up afterward.

What Are Owls Looking For? Locating Your Deterrent Strategically

Owls typically hunt for snakes, rabbits, rats, and other small mammals. That means that they typically will target a wide-open field or other location where they can find and capture their prey easily and without danger. Unfortunately, when those fields are barren and their prey isn’t feeding there, another source of small mammals can be your yard. They’ll swoop in for rabbits, chickens, and young animals in your farmyard or other property, and they’ll even target some pets, including small dogs and cats.

Big dogs can scare off owls on the hunt and, if they are flying in and see the dog’s eyes watching them from a distance, they know they’re taking a big risk intruding on his space. If they’re hungry enough, though, birds of prey can treat dogs as a competitor and attack, leaving your dog hurt and vet bills to pay. This is especially a problem with some species of hawk and the great horned owl.

Tidying Up: Keeping Owl Prey Away

Small mammals and birds are owls’ favorite meals, so a key part of discouraging owls from visiting is keeping rats and mice, frogs and snakes, and other small creatures from living near your home’s yard and your barnyard. Removing hiding spaces, spots where water collects, good burrowing areas and spots for collecting dropped food, pet food, and garbage helps discourage them from setting up camp and attracting predators. If necessary, you can call in the pros and use pest control strategies to keep your rodent population down.

Owls love a place to perch and watch for prey, and your lovely unpruned trees may be full of such places. A bit of pruning to reduce the perching space and expose them to eliminate the stealth factor can discourage this predatory owl strategy and protect your animals. Bird experts remind us that this should be done outside of the nesting season to protect birds who are raising their young.

It’s wonderful to have a yard full of life, and bird feeders draw all sorts of winged creatures and small mammals who eat from them and feast on fallen seed on the ground below. Unfortunately, this scene is one that makes owls hungry. The small creatures that you’re helping to get through the winter can also provide food for owls who are trying to get through the winter, too. In order to avoid bringing owls to your yard, you need to make a trade-off. It might be possible to relocate the feeder in your specific case so that the owls don’t come near your protected animals, but that’s a choice you’ll have to make carefully.

It’s not clear why, but daytime predators are often scared off by reflective strips of metal. As the wind blows, these “scare tapes” apparently confuse the birds with light and make noises that distract them as well. Of course, this is not a good solution at night. Nite Guard Solar, a product that simulates the glow of predators’ eyes at night, takes care of that.

Nite Guard Solar, which uses solar power to flash simulated predator eyes, keeps working and scaring off owls all night, every night. Simulating a predator’s presence near to your protected creatures, it lets owls and four-legged predators know that this is not a safe hunting ground. Inventor Jim Meyer’s inspiration for the product arose at Oakwood Game Farm, where he has raised game birds for 50 years.

What has worked for Jim and thousands of other people protecting their birds and animals from the incursion of predators can work for your situation. That’s especially helpful when the owls get hungry in the cold of winter and prey is scarce — except for the ones you’re raising.

At Nite Guard we can help you develop a strategy for protecting your birds and other animals from predators, first identifying them, then using their habits and instincts against them. Nite Guard Solar has been proven effective at a cost that makes protecting your property affordable. Call us or order online to get started keeping owls away all night, every night.