How to Keep Owls Away 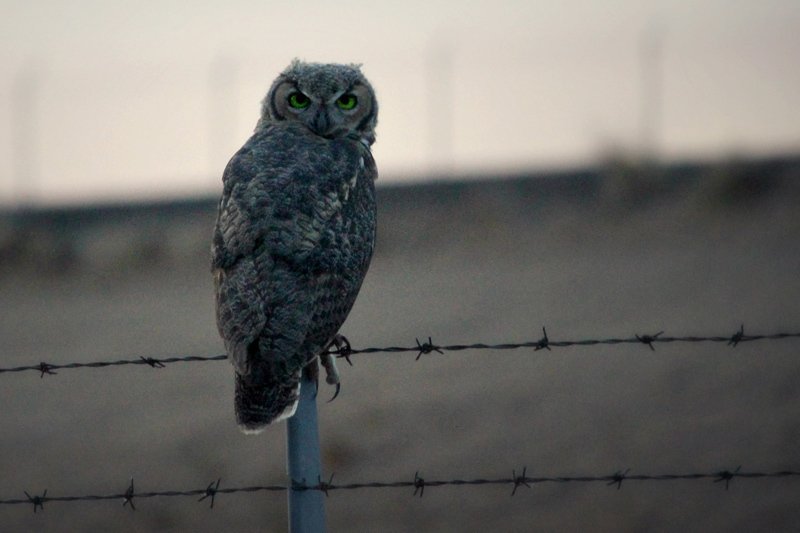 Think of the relief you’d feel if you could guarantee that your cats, dogs, and chickens were safe from owls. While not the most always the most imminent threat to chickens and household pets, owls are best kept away.

When deciding on the best owl protection for chickens and pets you’ll need to know about local laws and develop owl identification skills. It is absolutely illegal to hurt or kill a bird of prey, which includes owls. Should you break this law, you may be handed jail time and/or a hefty fine, so we’ve compiled some less lethal owl deterrent suggestions.

One way to keep your chickens and pets safe is to move them inside at night while owls are actively hunting. Once they’re indoors and more difficult to access, any circling or perched owls may automatically leave your area.

Make sure your chickens get into the coop by dusk and securely close it all night until the daylight has fully onset again. Owls don’t require the pitch black of night to hunt; they’ll also hunt at dusk or during early morning when the light is less intense.

Protect with a Net

Another way to keep owls away is by securely covering your chicken run with bird netting (assuming, of course, you have a chicken run — netting won’t make a difference for free-range chickens). By putting up a physical barrier between an owl and its prey, the owl will lose interest and leave to find food elsewhere.

Nylon netting (poultry wire can also be used) is both inexpensive and effective; its presence will prevent owls from making any diving attempts. It’s easy to hang, and you’ll be able to find at most hardware and garden supply stores.

Rooster at the Ready

If you’re wondering how to scare an owl away, the presence of a loyal rooster with the readiness to crow will do the trick. (You may need several roosters if your chickens number more than 15.) A rooster is also fiercely protective and will fight any owl who gets within range. Roosters are keen assessors of the true level of danger. If a rooster notices an owl or other prey, he’ll emit a sharp and shrill warning whistle to tell the chickens to take cover until danger has passed.

Note: Roosters aren’t allowed in every area (especially in urban zones), so check your local rules before bringing one home!

Take a Pass on Perches

Owls, like any predatory birds, also often roost in high trees or on building gutters, so any kind of perch-like structure or pole can be dangerous. The best action you can take is to remove any possible landing surfaces where owls could land to watch their prey and prepare to strike. Get rid of any trees, poles, or other observatories. To prevent perching on structures you can’t remove, you can install spikes like those found on power poles. Place the spikes on any areas where owls could potentially land.

Get crafty by thinking camouflage. When choosing your chickens, look for the breeds that will naturally blend in with your environment. White Leghorn chickens, for example, tend to stand out in any environment and make clearer targets for predatory birds like owls. A Brown Leghorn chicken, on the other hand, may be less of a beacon for hungry birds.

Another way to work with camouflage is to create plenty of options for easy hiding. Bushes, brush, deck and overhang access where your chickens can take cover is essential. If an owl comes circling and your chickens have taken cover, the owl will often fly away without investigating further.

Give Them a Shock

You can also get rid of owls by shocking them, literally. Install tall poles around any areas prone to owl attacks. Add electric pole shocker devices on top of each pole. If a curious and hungry owl flies by and tries to perch on a pole, it’ll get an electric shock — which means it’ll fly away and hopefully not return.

What kinds of devices can you use to keep owls away? Devices that startle or frighten are always a good option. Exploding devices, for example, create a sound like a gunshot that owls won’t enjoy.

You’ll also have a good chance of getting rid of owls if you put an owl or hawk decoy near your coop or yard. Decoys aren’t 100% foolproof, but they will set up an extra line of defense. Since owls are territorial, the presence of a decoy will deter other owls from trying to claim the area.

Make sure the fake owl or hawk (or even scarecrow) isn’t visible to your chickens, though. If they see it, they may get nervous, and that instability could make your rooster aggressive. Also make sure you don’t leave your decoy(s) in the same place for long. Owls are known for their intelligence and will get used to these static statues unless you move them around on the regular.

Since owls are nocturnal predators, lights and bright flashes at night will deter them from your yard/coop. Make sure you install any lights outside your coop or structure, since indoor brightness could disrupt your chickens’ sleep patterns.

Nite Guard Solar lights and Nite Guard Repellent Tape will keep your property protected from hungry and determined owls 24/7. Give us a call at 1-800-328-6647 or send us a message for advice or installation assistance.