How to Deter Hawks from Chickens 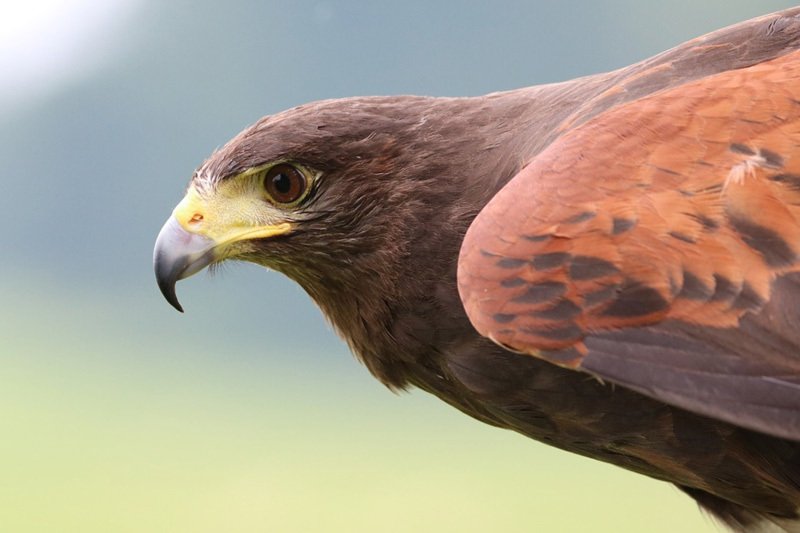 Hawks are predatory birds that hunt during the day when chickens are running around, scratching and pecking as they forage for seeds, insects and worms. With its keen eyesight, a hungry hawk can perch high in a tree where your chickens may not even know it’s there until it swoops down to strike. Using its sharp talons, a hawk often kills its prey upon impact or snatches a chicken and carries it away mid-flight. Once a hawk plucks a tasty meal from your flock, it’s likely to come back for more. Since hawks are protected by federal law, poultry owners aren’t allowed to physically harm these birds, no matter how devastating they are to your flock. Prevent unwelcome visitors with this list of effective tips to deter hawks from attacking your chickens.

Add a Rooster to Your Flock

Chickens are ill-equipped to fend off a hawk, but roosters are built to protect the flock. If you don’t already have a rooster and you don’t live in an area that prohibits them, it’s a natural way to safeguard your birds. The males of the species are fierce protectors and can be quite aggressive when it comes to keeping the ladies safe. At the first hint of danger, a rooster makes a high-pitched sound similar to crowing to alert the hens to take cover. He’ll continue causing a ruckus, and the hawk will likely move on to less challenging pastures.

Get a Guard Dog

A large, well-trained guard dog watching over your flock is a great hawk deterrent. A guard dog’s role is the same as a rooster, but with enhanced capabilities. Dogs are larger and stronger than roosters and aren’t easily threatened by hawks. Great Pyrenees have been used as livestock guardians for hundreds of years due to their natural guarding instinct. However, many other dog breeds make excellent deterrents, becoming hostile when they sense danger. Sometimes, just having a dog in the area is enough to discourage hawks that prefer easy prey.

Allowing your chickens to free-range has quickly become a popular practice, but it also puts your birds at greater risk. A chicken in the open makes a much easier target for hawks. If you’re committed to free-ranging, consider connecting a run to a coop to lessen the threat from flying predators. Chicken runs provide plenty of room for your flock to roam while keeping them safely confined. Another possible solution is a movable chicken tractor, which allows chickens to enjoy your pastureland while keeping them safe from attack.

If you use a chicken run, it should have a secure cover to keep hawks from swooping inside. Use chicken wire or hardware cloth as an effective barrier against predatory birds. When a hawk tries to dive through the wire or mesh, it becomes entangled, and your chickens have time to run away. Use brightly colored wire or netting hawks can easily see, and it may discourage them from even trying to get to your flock. If you want to provide shade as well as protection, consider using shade cloth over a portion or the entire length of your chicken run. Whatever material you use, make certain it’s secure and doesn’t leave any gaps a hawk can fly through.

Many hawk species target feeders because they know chickens are especially vulnerable when they’re eating. Chickens lower their heads when they eat and drink, so their guard is down. They’re also usually bunched together, providing multiple targets hampered from quick escape as they become trapped within the crowd. An intelligent hawk hangs around a feeder and waits for the perfect time to strike.

If you’ve installed a secure cover over your chicken run, you have no worries. For uncovered runs, build a feeding station and move feeders and waterers inside this enclosure. Covered feeding structures also provide a place for chickens to hide from hawks when they’re not eating. If you have a sanitary location within your coop, you could also place them inside this structure.

Decoys often make good deterrents if utilized appropriately. Unfamiliar shapes make hawks nervous. Scarecrows keep hawks on guard, but to ensure effectiveness over time, you must move scarecrows around frequently. Hawks get used to an object that stays in one place for long periods and no longer feel threatened by its presence.

You can also try the predator versus predator approach. Although owls typically hunt at night, some will hunt during the day and prey on chickens like most raptors. Hawks and owls are natural enemies and commonly attack each other, especially when food is scarce. However, hawks, especially smaller ones, prefer not to tangle with owls. Consider a large owl decoy to deter hawks but remember to move it around as you would a scarecrow.

Hawks don’t like noise, but they sometimes get used to it, just like they do a decoy. Use various sources of noise and switch it up every few days. Wind chimes, radios and other sounds often discourage hawks. Combine noise with bright flashes of light for a greater effect. It’s an excellent use for old CDs or DVDs you don’t want anymore. Hang these or other reflective objects on trees and posts around your chicken run, and the bright flashes caused by the sun’s rays make hawks think twice about approaching. Pie plates are another ideal option, but don’t use mirrors, which could start a fire.

Flashing deterrents are some of the easiest, most cost-effective solutions to rid yourself of hawks. Nite Guard Repellent Tape, available through Nite Guard, LLC, provides heavy-duty reflective tape that makes hawk-deterring noise. The combination of bright flashes and unexpected loud, crackling noise effectively frighten hawks. Because they’re unsure what created the light and sound, hawks fear for their safety and fly away, leaving your chickens in peace. Contact us at 1-800-328-6647 to learn more about keeping your chickens safe with Nite Guard Repellent Tape today.