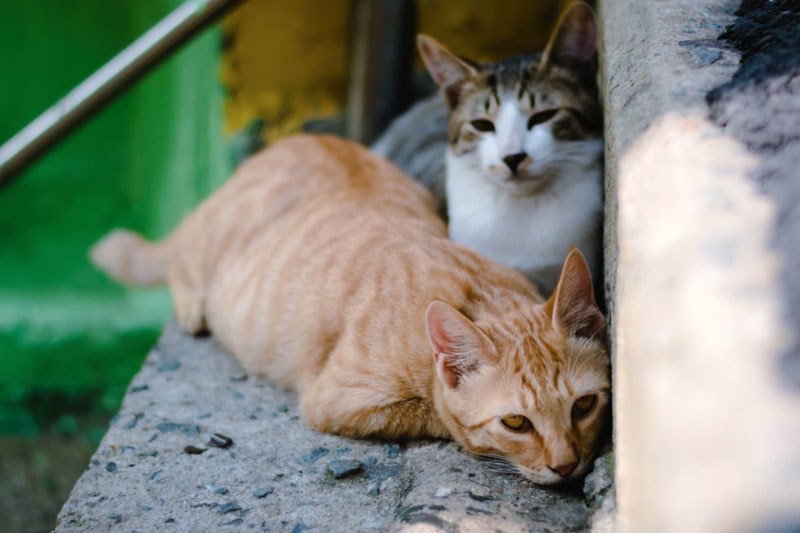 A feral cat colony can grow quickly from one or two cats to dozens as they reproduce, eat your pets’ food and any garbage they find, spread disease, and engage in conflict with local animals and children. Fortunately, there are humane and constructive ways that you can address your feral cat problem.

For Feral Cats, Home is Where the Food is

Food is their anchor. If you leave food out for your own pets or providing unintended sources of food such as open trash cans, you’re likely feeding them also. Your kind-hearted neighbor might also be putting out food — they may keep their home in your yard and wander over for a nibble, then return to the safe spot they’ve found with you.

Block access to food sources and nesting sites by covering spots under porches and holes with basement access, either with solid covers or wire mesh. Keep trash tightly covered and make sure that they don’t have any convenient spots to stash their own food sources such as dead birds and small animals, which you may notice by smell as time passes.

It may be tempting to try to get along with your local feral cat colony, but you’re wise to look for a proper solution to the problem. Feral cats don’t have the same behaviors as domesticated pet cats, and they can react ferociously to being approached by other animals or people. They also are likely to be unvaccinated, which makes contact with them, especially from bites or scratches, a matter of significant concern for you and your pets. A naturally friendly child, or household dog or cat, might provoke a risky situation.

Humane Societies, cat shelters, and animal control for your locality are very familiar with feral cats and can help in a number of ways. They often will lend the special traps that you can use to catch the cats humanely for transport. These are simple to use: you place them in your yard in a spot where the cat will be safe from the sun and weather until you pick up the trap.

Covering the trap can help protect the cat as well, and keep it from being stressed by activity outside the trap. The trap serves as a way to get the feral cat into the shelter for care and treatment.

The feral cat problem is significant, and volunteers have set out to help reduce the population by cutting down on feral cat breeding capability. Most housecats are already neutered to keep additional kittens from requiring homes, but feral cats can reproduce with litters of as many as eight kittens or more starting when they are fairly young. The lifetime births of a feral female can add dozens or even hundreds of feral cats to the community.

When you volunteer to trap cats in your neighborhood, you can make a big difference. There are TNR (trap, neuter, release) programs that help make a significant dent in the feral population by sterilizing feral cats and releasing them. They can be difficult to take in as housepets, so making an effort to naturally reduce the population is a good start towards managing the population of cats living in the wild.

Use Scents to Set Boundaries for Feral Cats

Naturally occurring scents can communicate with feral cats, sending them the message that they’re in a risky location. If they smell scents related to predators or other menaces, they’ll stay away. Offensive scents such as mace are available for outdoor use as well. Bottled scents are available in pet and hunting retail stores and online. Scents will need to be reapplied on a regular basis, especially in rainy climates, in order to keep the deterrent effect in force. If the feral cat or colony of cats moves on, you can stop applying the scent until you see signs that they have returned or another colony is moving in.

Feral cats go where there’s food, but they run from places where they could be food for predators. You can take advantage of a solution that those in the agriculture business have found to be successful — a simple, solar charging device that simulates the glow of a predator’s eyes in the night. This technique keeps large animals away from livestock, beehives, fruits and vegetables, and other important sources of revenue. It’s a great solution for keeping feral cats away from your home. In cases where cats are not the only creatures roaming your neighborhood at night, you’ll get extra advantage from this technique as you keep your space clear of many problematic visitors.

Since this is a newer technique for keeping animals away, here’s an explanation of the device. The original solar-powered Nite Guard looks like a security camera. It charges during the day, and at dusk it activates, flashing what looks like the glow of animal eyes throughout the night, every night. lf you’ve ever taken a walk in the wild at night, you know the effect a pair of glowing eyes has on you — and it likewise sets cats and other creatures on alert when the Nite Guard creates the same effect. It’s safe for both people and animals, and ecologically friendly. It doesn’t require any battery changes or regular maintenance to maintain its full effect.

Nite Guard is a Good Place to Start

Contact the makers of Nite Guard to purchase a device for testing or, as many people do, buy a set of them to get the best results right away. Nite Guard has experts ready to respond to your questions not only about their device and how to use it but about strategies for dealing with unwelcome wildlife and feral cats in your neighborhood and on your farm. Contact them at 1-800-328-6647 or by email using the form below.